To many Chinese, the most important cultural tradition of the Chinese Lunar New Year, or the Spring Festival, is the family reunion.

But joining the family is just the beginning, as there are many more traditions that follow.

Take Zhang Qinwei as an example. Zhang, a businessman, just returned to his hometown in south China's Guangdong Province from Dubai, after spending his last three Spring Festivals overseas.

In his tight schedule during the holiday, he will join the family in preparing the festive food, paying tribute to ancestors, and visiting relatives and friends in person.

Overseas Chinese have long been taking the Spring Festival traditions with them, but returning home brings extra warmth to Zhang.

He said that over the past few years he greatly missed the tastes of the traditional new year pastries and snacks popular in his hometown.

The food element of Spring Festival traditions varies across regions. From dumplings to sticky rice cakes, from fried meatballs to braised fish, all dishes shared always carry the best blessings for the family in the new year. 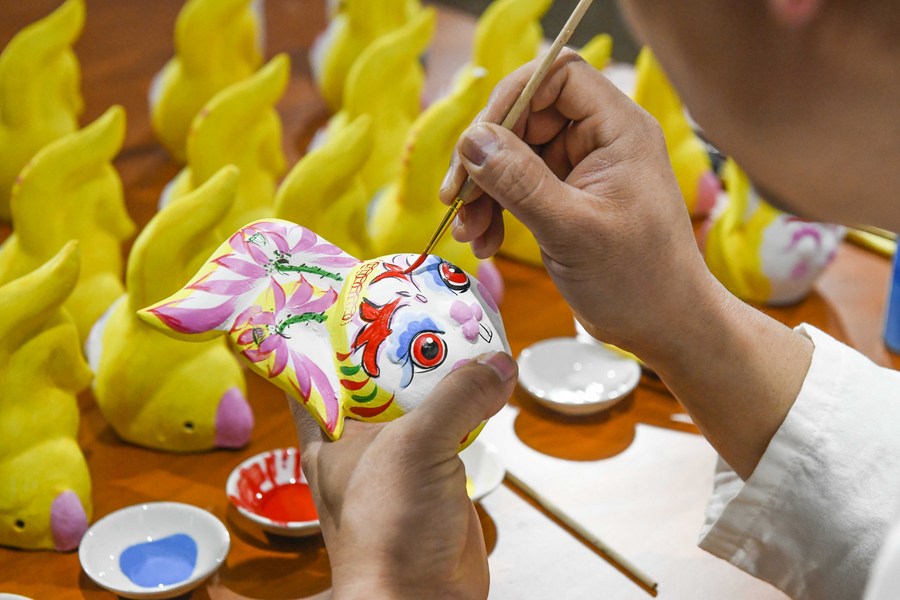 Li said his adjustment to the traditional design, by incorporating modern elements, became an instant hit in the Year of the Rabbit, adding that more and more young people are embracing traditional culture and joining the ranks, introducing innovative thinking and making the traditional crafts younger and more vibrant.

People visit a special exhibition for the Year of the Rabbit in the Shanghai Museum, Jan. 22, 2023. (Xinhua/Ren Long)

Festival traditions are also evolving, as it is noteworthy that many Chinese are exploring new ways of spending their Spring Festival holiday, such as visiting museums, exhibitions and bookstores.

More than 2,200 Spring Festival-related exhibitions and activities are being presented at over 900 museums across the country, according to the National Cultural Heritage Administration.

For those not interested in physical travel, the cinemas also offer rich new choices during the week-long holiday, from domestic sci-fi film "The Wandering Earth II" to suspense comedy "Full River Red."